We're so glad you are here. We hope you discover the same hope and life-change that we have found in Jesus. Discovery is more than just an hour on Sunday. We are a family -- family on mission in Tacoma!

We started Discovery to be a safe place for everyone in the community to experience God. Everyone is welcome here--with all your stories, questions, and doubts. Let's explore faith together. 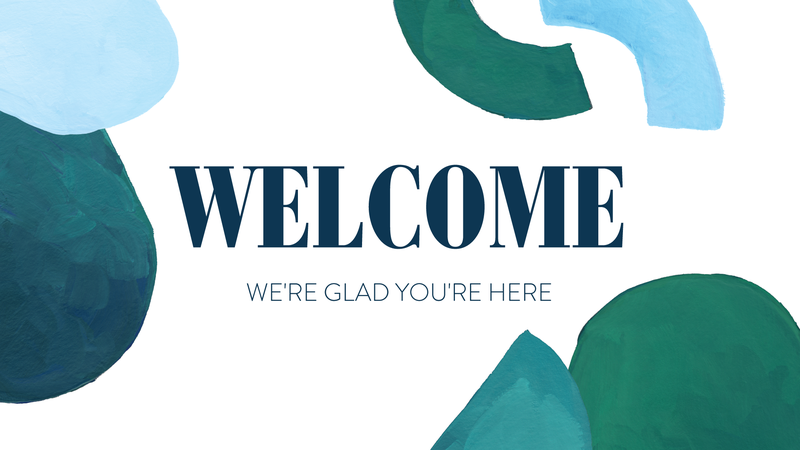 We'd love for this online church experience to be as interactive as possible! If you're watching on Facebook, please introduce yourself & let us know where you're tuning in from.

Follow along with this Worship Guide as you watch the service. We recommend a second device or download a printable version here. Grab a bible & a pen -- you'll want to take some notes.

Welcome to Commitment Sunday! If you are just joining us: we have spent the month reorienting to God’s call to us to live globally. This Sunday, our last Sunday of NATIONS, we set aside as Commitment Sunday. In a few minutes, I am going to encourage you to do something: to take one step, and you get to take the step, even define the step.

We have been following Abraham and his life journey recorded in Genesis. Today we are going to wrap up, by jumping to the New Testament.

Just before Abraham is discussed in Hebrews, there is an important preface: Hebrews 10:36-39 New International Version (NIV)

You need to persevere so that when you have done the will of God, you will receive what he has promised. For, “In just a little while, he who is coming will come and will not delay.” And, “But my righteous one will live by faith. And I take no pleasure in the one who shrinks back.” But we do not belong to those who shrink back and are destroyed, but to those who have faith and are saved.

We are gonna talk about Abraham, but only because his life and how he lived is deeply relevant to times like these!

So, if we ever needed a Commitment Sunday: a commitment to what?

“But my righteous one will live by faith. And I take no pleasure in the one who shrinks back.”

...when the Son of Man comes, will he find faith on the earth?

There has always been a lot of confusion about what faith is: that's why the author of Hebrews recaps Abraham.

By faith Abraham, when called to go to a place he would later receive as his inheritance, obeyed and went, even though he did not know where he was going. By faith he made his home in the promised land like a stranger in a foreign country; he lived in tents, as did Isaac and Jacob, who were heirs with him of the same promise. For he was looking forward to the city with foundations, whose architect and builder is God. And by faith even Sarah, who was past childbearing age, was enabled to bear children because she considered him faithful who had made the promise. And so from this one man, and he as good as dead, came descendants as numerous as the stars in the sky and as countless as the sand on the seashore.

The kind of faith that God looks for has little to do with happy feelings or a positive mental picture of the things we want. You and I have a far more tangible call. And the time that we needed clarity and a recommitment to faith, and how to live it out, is now.

I'm going to challenge you and encourage you to commit today to:

A Faith that Perseveres:

1. Responds to the One calling

By faith Abraham, when called to go to a place he would later receive as his inheritance, obeyed and went, even though he did not know where he was going

And without faith it is impossible to please God, because anyone who comes to him must believe that he exists and that he rewards those who earnestly seek him.

Jesus answered, “I am the way and the truth and the life. No one comes to the Father except through me.

Salvation is found in no one else, for there is no other name under heaven given to mankind by which we must be saved.”

2. Readily leverages the stuff of earth

By faith he made his home in the promised land like a stranger in a foreign country; he lived in tents, as did Isaac and Jacob, who were heirs with him of the same promise. For he was looking forward to the city with foundations, whose architect and builder is God.

You see that his faith and his actions were working together, and his faith was made complete by what he did. And the scripture was fulfilled that says, “Abraham believed God, and it was credited to him as righteousness,” and he was called God’s friend. You see that a person is considered righteous by what they do and not by faith alone.

Abraham took his life, his plans, his family, and traded away everything to live faithfully.

He leveraged everything for the call and mission of God

Do not store up for yourselves treasures on earth, where moths and vermin destroy, and where thieves break in and steal. But store up for yourselves treasures in heaven, where moths and vermin do not destroy, and where thieves do not break in and steal. For where your treasure is, there your heart will be also.

3. Rests in a future secure

And so from this one man, and he as good as dead, came descendants as numerous as the stars in the sky and as countless as the sand on the seashore.

But truthfully, Abraham the great Father of Faith. He never saw, with his eyes, a nation, the descendants, the promised land, or even the coming Messiah: yet he rested in a future secure.

Praise be to the God and Father of our Lord Jesus Christ! In his great mercy he has given us new birth into a living hope through the resurrection of Jesus Christ from the dead, and into an inheritance that can never perish, spoil or fade. This inheritance is kept in heaven for you, who through faith are shielded by God’s power until the coming of the salvation that is ready to be revealed in the last time. In all this you greatly rejoice, though now for a little while you may have had to suffer grief in all kinds of trials. These have come so that the proven genuineness of your faith—of greater worth than gold, which perishes even though refined by fire —may result in praise, glory and honor when Jesus Christ is revealed.

God will absolutely accomplish His will; the great question is: will you and I be an integral part of it?

We are asking you to pray, give, and go. I want you to dive in, but let it be an overflow of your decision today to a life of faith. Let’s start right there, then: pray, give, go.

Pray -
Jesus, I know that I have been separate from you my entire life. I have tried to pretend otherwise, but I realize today that my decisions, choices...my sin has separated me from God. I believe you are the Son of God and my only way forward. Please save me as I surrender the rest of my life into your hands. Thank you that you hear me!

Let us know!
We want to be in this journey with you and help in way we can. Fill out a Connection Card - or even text it to the prayer line!

Start Reading!
We think the Gospel of John is a great place to start. Consider using the app: YouVersion.

Celebrate!
Follow along with some of the worship provided on discochurch.com/live
And share what God is doing in you!

Just like our in-person gatherings, we invite everyone to fill out a online Connection Card each week. It’s a great way to get & stay connected. You can update contact information, request information, and share prayer requests. And, if this is your first time joining us, we'd love to send you a gift. We promise not to misuse your information; no impromptu house calls! ;) 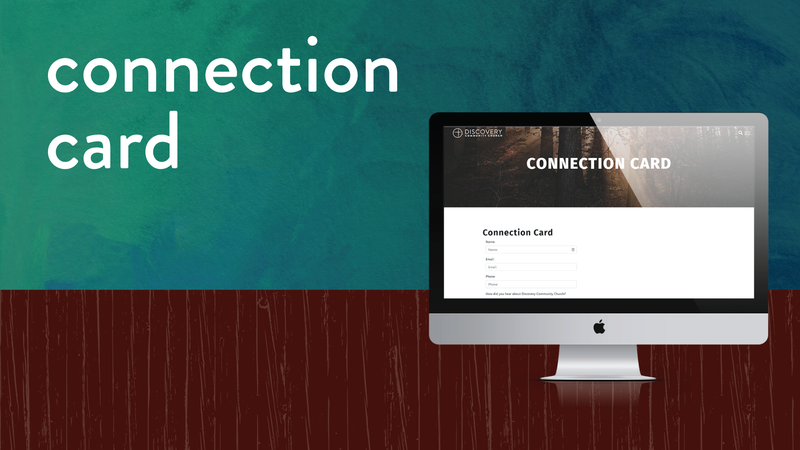 GIVING BACK TO GOD //

Thank for your continued generosity during this season. Tithes & offerings can be made online or by mail. 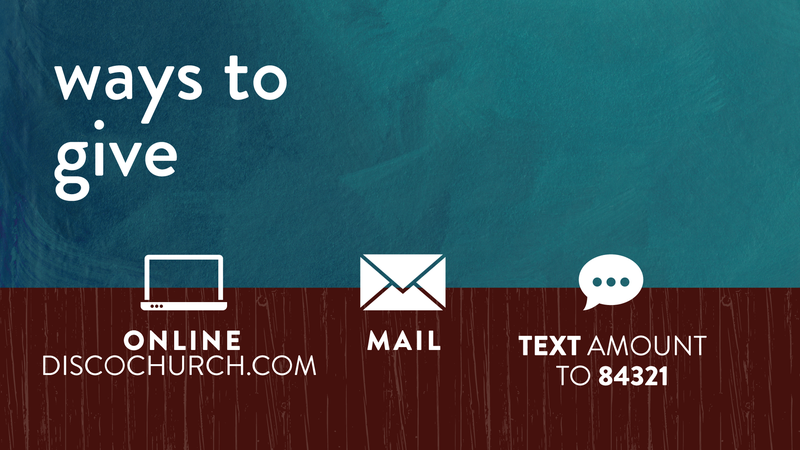 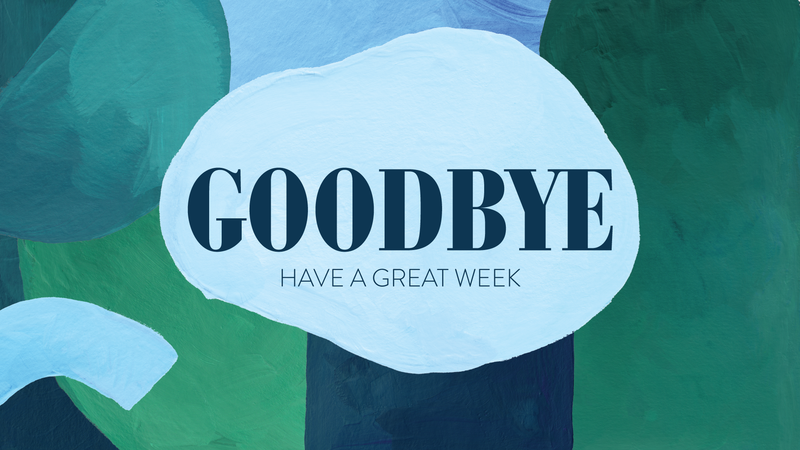